Girl Genius
Register
Don't have an account?
Sign In
Advertisement
in: Characters, Articles with "Mad" counterparts, Villains,
and 4 more

with trumpets and fanfares ✣

As Agatha arrives in Mechanicsburg to enter Castle Heterodyne, she is shocked to witness the arrival of a mysterious young woman in a pink dress, descending from an equally-pink airship to perch atop the Mechanicsburg Heterodyne Memorial Statue and proclaim herself the Heterodyne heir that everyone is awaiting following the Battle of Sturmhalten.

After this individual enters the Castle with her henchmen, we learn that her name is Zola, and that she is the public face ✣ of the Storm King conspiracy, a plot to seize power over large parts of Europa from Baron Klaus Wulfenbach. The plotters hope to gain public support by convincing ✣ the world that Zola is the returned heiress to House Heterodyne and then marrying her to the current official heir of House Valois, thus staging a new fourth act to the story of the Storm King, this time with a happy ending (for them). Zola's immediate goal ✣ is to take control of Castle Heterodyne.

Of course, both we and Agatha know that she is not really a Heterodyne ✣ at all. Even so, since it takes a long time for her actual surname to be revealed, the cast list for Girl Genius originally refers to her as "Zola 'Heterodyne'". It is also mentioned ✣ at one point that her stage name while in Paris was Zola, "La Sirène Dorée" or Zola, "The Golden Siren". She eventually, finally, gives her full name as "Zola Anya Talinka Venia Zeblikya Malfeazium ✣ ", daughter of Demonica and niece of Lucrezia. This, of course, makes her Agatha's cousin (as well as Theo's). A noteworthy but brief messup was when the 20100628 comic page was first posted, the name Lucrezia shouts in the first panel was "Serpentina!" but was quickly changed to "Demonica!"

The part Zola plays in the conspiracy is very much the anti-Agatha: she's flashy, where Agatha is subdued; she's overdressed, where Agatha dresses practically; she plays to ✣ the crowd, where Agatha causes ✣ the crowd to play to her. And, above all, Zola is living a lie, where Agatha is trying to find her true self. That by itself would justify labeling her as a villain, but there's more. Zola has no problem killing or maiming when she thinks it's necessary (or simply expedient)[2][3][4], where Agatha is (on her better days) kind-hearted and heroic. Agatha has trained in martial arts with Zeetha, and Zola knows some arcane mental disciplines. Further, Zola is in league with some very bad people who want to seize power for its own sake, where Agatha is struggling to survive and to protect the world from the Other.

Zola's later, adept machinations raise the possibility that any or all of her previous, inept interactions (detailed below) may have been a ruse.

Prior to the opening of our story, Zola knew Gil ✣ when he was a university student in Paris, where her chosen occupation often brought her into contact with the local Sparks and their insane devices. Gil played ✣ swashbuckling adventurer to Zola's damsel in distress, but romantic sparks apparently never caught fire between them, perhaps because she couldn't hold up ✣ her end in a Sparky conversation. Because Gil was living incognito in Paris, Zola was unaware that her friend was the son of Baron Klaus Wulfenbach.[5] Gil knew her as a foolish pawn, though not - to his knowledge - a malicious one. However Zola always believed that her roles in the kidnappings were an integral part of the sparks' plan. Their acquaintance ended when Zola abruptly left Paris. Oddly, all her bills had been paid off, though she had had financial trouble ✣ before.

Arriving at Mechanicsburg in Style[]

Zola makes her first appearance ✣ in Mechanicsburg by way of ✣ Vienna, probably having spoken to the conspirators' Council there. After descending from a pink, very pink airship festooned with Heterodyne trilobite sigils[6], she catches the eye of the crowd in a matching flamboyant pink outfit. She delivers a bombastic oration (nauseating Agatha and Krosp), summarily banishes the Black Squad that tries to stop her (with the help of her only named minion, one Herr Vikel), and begins a grandiose procession to Castle Heterodyne. Where Agatha refuses to subject her friends to the danger of entering Castle Heterodyne, Zola insists ✣ that all her minions accompany her, resulting in all of them dying at one point or another.

Zola's pageant is financed ✣ and managed by House Strinbeck and House Oublenmach, among others. They are moving years earlier than planned to take advantage of the Baron's injuries ✣ and to secure the legitimacy conferred by controlling Castle Heterodyne before the other Heterodyne heir recently announced ✣ in Sturmhalten can undo all their years of preparation.

Inside the Castle, Zola links up ✣ with Professor Tiktoffen, a conspiracy member who has been studying the Castle for years. Though the Mechanicsburg crowds ✣ , Tiktoffen ✣ , and Oublenmach and Strinbeck ✣ believe she plans to take control of the Castle, Zola begins issuing orders to kill ✣ its mind, using a device smuggled in ✣ piece by piece over some time. Upon learning that Agatha is also in the Castle, Zola promises freedom and gold ✣ to any prisoner who manages to kill her, and blows away the Woman With the Veil Hat pour encourager les autres when the latter sensibly objects to chasing Agatha into unexplored parts of the castle.

When Zola encounters Gil in the Castle, she accepts his story that he is actually ✣ a pirate who entered the castle in search for treasure. Although Zeetha is suspicious of Gil's reasons for playing along with Zola, Gil reveals that he's never known the Pink Fake to be malicious ✣ . Agatha catches up with Zola and Gil and crushes ✣ Zola with ease, revealing Gil's ruse along the way.

However, true to the ability of the Professors to spin a tale, this formerly reviled character becomes more sympathetic when it's revealed that she really does care for Gil, even willing to plead with the scary Heterodyne ✣ when she thinks his life is threatened and tend to him when he's down ✣ .

We also learn ✣ that Tarvek was acquainted with both Gil and Zola in Paris, and was discomfited ✣ by some of the adventures and scrapes that Gil got into, which are likely to have included some of the ones related to Gil rescuing Zola. Tarvek is originally unaware ✣ that it is Zola who was selected for this plot, but when he learns it's her ✣ , he suggests that she's far more dangerous than we had previously believed.

Zola temporarily outmaneuvers and physically overpowers most of the sparks and other combatants residing in the castle (including Agatha, Gil, Tarvek and Lucrezia) and, thanks to previous preparation (with assistance from the rogue Geister Loremistress Milvistle), manages to imprison ✣ a copy of 'The Other' in her mind, whose memories she can (mostly) peruse at will. She then rampages through the castle at her convenience due to "Hate and Drugs! Lovely, lovely drugs!" ✣

Although things do not go well for her later, she escapes the castle with Gil's help, ✣ badly injured but alive. She then turns up in the Great Hospital, where she meets the copy of 'The Other' who is masquerading as Anevka. She presents ✣ herself to the copy as being solely Lucrezia, but anything that either personality says should be taken with extreme skepticism. She does tell the clank-copy about the successful wasping of Baron Wulfenbach. When last seen in Mechanicsburg, she is undergoing accelerated healing thanks to Anevka-Lucrezia jury rigging the Hospital's medical equipment.

The Rise of the Queen[]

Agatha's public assumption of the role of Heterodyne probably permanently ends any lingering chance Zola has of stealing the title, and following the Timeskip, Gil has driven further nails into that particular coffin by erecting giant statues of Agatha all around Mechanicsburg, leading to Agatha's image being plastered all over widely-sold Heterodyne-labelled merchandise. Zola has been entirely written off ✣ by members of the Storm King conspiracy, at least some of them believing that she was still trapped in Mechanicsburg.

While it is a long time before the reader learns this, Zola is in fact able to escape the destruction of the Hospital and leave Mechanicsburg before the Take-Five Bomb is activated. Over the next two years she establishes a new identity for herself as the Queen of the Dawn, a persona with the public image of a beloved peacemaker who has brought numerous northern European powers under her sway, quite likely via the use of Slaver Wasps. Her Geisterdamen minion in Paris, Madame Velix, is definitely using the creatures, or preparing to do so.

Her identity is confirmed in-comic when Tarvek recognizes her as she makes her extravagant, uninvited and unannounced Paris debut at his grandmother's costume party. She eventually takes off her elaborate mask, making this observation official. Events rapidly unfold which steal her thunder, and lead to the rise of Colette Voltaire as the new all-powerful Master of Paris. Grandmother cheerfully compliments Zola on the relative success of her ongoing attempts to Rule The World (or at least Europa) and "offers" her help in keeping Zola out of Colette's hands. Letting Zola out of her own clutches may be an entirely different matter.

It should be noted throughout all of this, the question of who is currently controlling Zola's body remains unanswered. 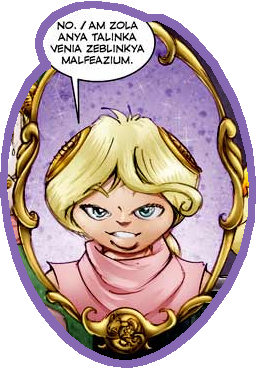 Between fan discussion and Agatha's temper, Zola has accumulated a considerable number of nicknames. In the comic, starting from her first appearance in Mechanicsburg, she has been called:

As well as a variety of descriptive phrases such as "the girl they groomed to be the Heterodyne" and "Your fake Heterodyne ✣ " and "that idiot from the Island of the--", as well as a "Parisian Tart."

The version of Zola who appears in the Girl Genius print novels isn't much different than what we see in the comic, although in the scene where she meets the clank copy of Lucrezia in the Great Hospital, it is explicitly revealed that Zola is the one in charge, and is frantically sorting through Lucrezia's stored memories in a successful attempt at impersonating her.

Zola declaims, "Yonder lies the castle of my father," ✣ a line attributed to Tony Curtis from "Son of Ali Baba", in which he played a thief. The line had become a cheesy legend in its own right because Curtis's native (Bronx) accent rendered it as "Yonder lies da castle of my fodda." Curtis denies saying exactly those words; he has never denied the accent.

Malfeasance refers to a wrongful act, specifically something one had previously sworn or contracted not to do. On the other hand, Venia is the Latin word for "forgiveness" -- a venial sin is one that is easily forgiven. (It may be that venal -- capable of being bought/corrupted -- was intended.)

"Zola" in Slavic languages means "cinder", with "Cinderella" pronounced as "Zolushka". On the other hand, word can also be derived from "zlo" - "evil". There is a Russian parody of the fairytale exploiting the pun, so it may actually be both.

Interestingly, there's another American singer, Zola Jesus, who formally goes by her Slavic name (as opposed to her stage name), Nika Roza Danilova.

For a (possibly) complete list of appearances of this character or other entity, see: Zola Malfeazium/Appearances.
Community content is available under CC-BY-SA unless otherwise noted.
Advertisement