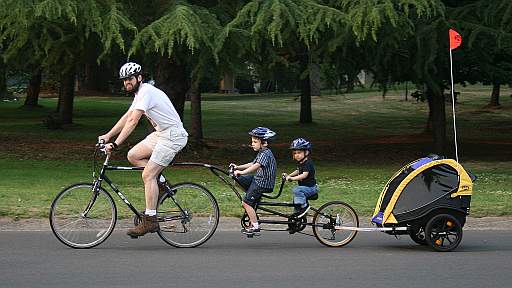 The true story: Once upon a time (over 20 years ago now, when the Apple //e was popular) there was a high school computer [programming] club that decided to participate in the school's annual fundraiser for clubs, a Halloween carnival. The president of the club (in consultation with the club's staff advisor and probably some of the members) decided that a fortune-telling booth, using a computer program would make an excellent booth for the carnival. A book in the school library with various methods of fortune-telling (e.g., cabalistic name analysis, telling fortunes with dice) was xeroxed and chapters distributed to members of the club for implementation as Applesoft BASIC programs. The president wrote a master menu and called the whole thing Professor Zarchne's Computerized Fortune-Teller — the name probably being a corruption of "arachne" for spider, as Marvel Comic's Spiderman was the student's favorite comic book hero.

Well, this high school student didn't have very good study skills (no need to go into everything this might entail), but he did have excellent test scores and took a lot of AP classes and was accepted into the top-rated (at the time) science and engineering school in the US, where his performance was uneven at best. Actually, he spent a lot of time learning the Unix operating system (so at least his time wasn't totally wasted), part of which was practicing the standard cursor-motion keys (hjkl) using the famous Unix-cursor-motion-key-trainer, rogue (or, in Unix-manual-speak "rogue (6)"). Although rogue has spawned (or at least, inspired) many other games which are considerably more complicated and can take days or weeks to complete, a single game of rogue (at least to the failing student's ability and the version he was playing — 5.3 mctesq on Sequent Symmetry running (BSD-based) Dynix) could nearly always be completed at a single sitting; any given game was rarely the direct cause of missing more than one or two classes (and perhaps a meal).

Another property of rogue is that, although it was played on machines where the player was associated with a username that was essentially assigned by the system administration staff (which for this college's computer science department, at least at the time, happened to be student-run, but that's purely incidental), one can set one's name in the game away from this default, so that if one manages to reach the high score list it is this name that is displayed rather than the default (although the real user id is still tracked so that any given user has only one entry in the table). The student decided to use "Zarchne" as his username, but the length of the games was such that at some point he started tracking which "Zarchne" this was; viz.: "Zarchne C" (assuming he must surely have played a hundred games at that point) "Zarchne CI", "Zarchne CXII", &c. The real point here is that the character Zarchne is in this conception somewhat transfinite: he is not a single person, thus not a "he" at all; ageless, more or less sexless, more akin to a species, or perhaps a religious order; a picture of Zarchne the rogue character (when he's not wearing armor) might be reminiscent of a Hare Krishna devotee, or wikipedia:Ghandi or wikipedia:Slartibartfast. (In fact, any of the images linked from wikipedia:Minor_characters_from_The_Hitchhiker's_Guide_to_the_Galaxy, from Fenchurch (leave out the Caveman) to Zarquon (— who could be another subconscious inspiration for the name) would probably work as avatars for the rogue (6) Zarchne). Oh, PSmith might be another comparison that works for this.

big job, and others are helping. (Excuse to re-read!)