older than he looks

soldier (beyond that, it gets complicated..)

keeping all sorts of secrets

Airman Third Class Axel Higgs, known in some circles as The Unstoppable Higgs, is a most improbable legend in his own time[1]. Formerly an undistinguished crewman on the Wulfenbach airship Rozen Maiden, he has achieved a certain degree of fame for his single-minded devotion to duty in the face of circumstances that can reasonably be called "daunting." If there were a Medal of Honor in the Foglio-verse, he'd probably deserve several.

..And while the above is true enough, it's not all of the truth. To start with, "Higgs" is not the man's original name. As for what he is.. see below..

Higgs rescued the Baron after the retreat from Sturmhalten. How that came about is known only to himself, since he was the only survivor except for the unconscious Baron and the delirious Bangladesh DuPree, but this is the story he subsequently told:

Higgs was snoozing peacefully in his hammock aboard the aforementioned Wulfenbach medical airship when he was awakened by alarm bells going off. This was NOT a drill, as they say; the airship had come under bombardment at the tail end of the little dust-up at Sturmhalten, its bridge crew was dead, it had been invaded by weird slime monsters, and it was on fire in the bargain. Higgs managed to stabilize the situation and escape with the splattered Baron (reasonable enough, since it's his job) as well as the delirious (and subsequently very violent) Bangladesh DuPree (which has prompted many fans to wonder just what he was thinking), breaking Bang's jaw[2] in the process but incurring a few injuries of his own (a broken arm and leg plus a nasty bite). He and his charges escaped the burning airship in a launch while he was taking further damage from (and administering further damage to) DuPree. He was able to get the launch on the ground more or less safely, but on arrival, took friendly fire[3] and was assaulted by a nesting goose, both of which did yet more damage. The doughty fellow nevertheless managed to recount his tale of derring-do to Bug Squad troops on the ground ✣ before collapsing and being filled with rum, not necessarily in that order.[4]

Subsequent events (again, see below) suggest that Higgs may not have been entirely forthcoming in his account. 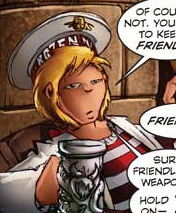 "Wait—How do you know they are smart?"
"They’re not fighting a bar full of Jägers."
"Heh. Good one. Hey! Just what are you implying?"

Higgs next shows up in the scheduled kick-back-and-relax, blow-off-some-steam bar fight at Mamma Gkika's; It should also be noted that he seems to have healed two broken arms, a broken leg, a bullet wound, and a bite (that was infected, by the way) pretty darn fast. Also, he's in the secret bar. Upon meeting fellow bar-visitor Zeetha, he instructs[6] her in the finer points of bar-room brawl etiquette. (The warrior princess is a fast learner, of course.) While he has shown himself to maintain the unflappably cool personality, he quickly learns that Zeetha can be a bit scary at times.[5]

Some fans, probably motivated by the banter between Zeetha and Airman Higgs, immediately began Shipping the two of them under the Portmanteau Couple Name of "Zeethiggs". This gets reinforced as the two of them seem to have paired up.[7][8] After Zola has made her move to escape Castle Heterodyne, Higgs and Zeetha spring into action as a team.[9] Both of them demonstrate remarkable physical talent.[10] Higgs feels they should stick together.[11]

When Zola runs Zeetha through with her own sword, Higgs appears to have taken it personally.[12] Higgs requests permission to leave Castle Heterodyne to get Zeetha to Mamma Gkika's.[13] Tarvek notes Higgs' concern for Zeetha as well as his Heterodyne connection.[14] As he leaves, even Der Kestle joins the Shippers.[15] Later at Mamma's, a convalescing Zeetha proposes a date and Higgs accepts.[16]

With the Siege of Mechanicsburg turning in favor of the defenders, Zeetha can't stay out of the action, where even Da Boyz have noticed "Zeethiggs."[17] Then Zeetha sees the man of her dreams in action.[18] Der Kestle tells Zeetha how Higgs feels, but says that if she learned who he really is, he'd have to kill her.[19] As Wulfenbach forces are being routed in the streets of the town, Der Kestle sets up Higgs so Zeetha can watch him fight.[20] Higgs refuses to show off his true abilities and so Zeetha saves him from being trampled.[21] Higgs finally says what he feels.[22] Zeetha suggests that they discuss this in private.[23]

When we catch up with them following the Baron-induced Timeskip, Higgs and Zeetha are traveling separate career paths, but still.. ahem.. talk[24] when they are able to snatch a chance to do so.

Batman to the Schmott Guy[]

Meanwhile when Gil meets Higgs in Mama's, he assigns the man the duty of carrying his Magnificent Hat, a duty which Higgs performs admirably, possibly too well in Gil's eyes. He has been accused by Gil of trying to cheer him (Gil) up[25]. Though somewhat less unstoppable in the situation he's been railroaded into, he still shows great cunning and foresight (he quickly and quietly ditches the Hat when he realizes Gil would rather not reveal himself as a Wulfenbach to Zola just yet).

Has taken a full-to-the-face blow from the Muse ✣ currently containing the Castle's consciousness, and apparently used that to determine whether or not the construct was functioning properly, while remaining deadpan, being apparently unhurt, and leaving a silhouette punched into the stone wall behind him.

Then ✣ he smacks the Muse in half. With a wrench. And his motivation for doing so appears to have been that it was about to reveal his true identity. Otherwise, presumably he would have stopped it in a way that better allowed for future repairs, and which would not have raised questions about his (apparently) new-found enormous strength. And with his expression, he makes it clear to sole witness Tarvek that the others are not to be encouraged to suspect that he has a secret. He has subsequently made it clear that whatever secret Tarvek knows should not be revealed. ✣

He also leads the rest of Our Heroes through the castle to Lucrezia's chambers and the secret passages beyond, claiming to have "found a map" that describes the layout of the castle ✣  (Theopholous DuMedd wisely decides not to question Higgs' knowledge, despite Sleipnir O'Hara's whispered protest and confusion). There, he again displays superhuman strength, speed and durability when he goes toe-to-toe with Zola while the latter is powered by a nearly-fatal dose of Moveit #11. Despite sustaining four different sword wounds that would disable or outright kill a human, Higgs not only stays upright and fighting but seems not to feel pain at all. ✣ (As an aside, at one point we see him without a shirt, and his body is evidently one big mass of scar tissue.)

In the two years and six months of Agatha's dis- and eventual re-appearance , he has remained in Gil's service, ✣ accompanying the young Baron during his investigations into time-frozen Mechanicsburg, encouraging him to be... less enthusiastic... in his missives to Agatha, and helping contain and counsel the new-and-improved Captain Vole. After Gil has gone after a kidnapped Tarvek, Higgs and Vole head off to Paris in order to re-unite with an injured Zeetha...

Higgs Beneath The Waves[]

But Higgs doesn't manage to catch up with her until she (and most of the main cast) have gone on to England, where he metaphorically resurfaces (sans Vole) working in uniform aboard a British military submarine as it transports Tarvek and Ardsley Wooster to Zeetha's (and Agatha's) current location: the undersea dome of the Queen's Society. It is during the subsequent confrontation with Tarvek, that, along with nearly casually throttling the other man to death, he finally more-or-less reveals/admits/confirms his true identity: He is the eighth "secret, sneaky" Jägergeneral.

Posing now as Tarvek's flunky, he enters the Society dome. After getting a glee and glomp-filled greeting from Zeetha, he assists the rest of the protagonists with the various threats that arise, including the local Grey Hood conspiracy, the resident Smakken, and the visitor the conspiracy summons. (Though he can't donate any of his totally normal human tissue samples for Agatha's medical research because he's.. afraid of needles.)

In the process of this, he and Tarvek have a rather cryptic and baffling conversation with "Karl Thotep", another more peaceable extra-dimensional visitor. Then he assists in the repeatedly interrupted and thwarted but finally successful attempt(s) to remove the copy of Lucrezia from Agatha's head; he has a particular interest in this, as getting rid of that interloper means he can finally tell Agatha who he really is..

And so.. after Our Heroes successfully flee the self-destructing dome, and get swallowed by a Great Cetacean, they finally have a few moments to relax and catch up. With head-Lucrezia gone, the almost certain but still tantalizingly not-completely-unassailable identification of Higgs as the eighth Jägergeneral is canonically confirmed ✣ on the comic page for Wednesday, February 19, 2020, when he kneels before Agatha and spills the beans. (His true identity is also confirmed by Word of God in the "cast list" at the beginning of Volume 18[26].) Higgs then gives his backstory to his mistress and Zeetha: he is one of the original Jägers created back in the day by the man himself, Vlad the Blasphemous, but while he has become strong, ageless and indestructible, he uniquely hasn't gained any of the other Jäger perks, not even the teeth, looking exactly the same decade after decade. Sometimes life is so unfair! He also notes that he now considers "Axel Higgs" to be his real name.

Higgs joins Agatha's expedition to Big Rat Island, where he meets something of a kindred spirit in Thomas Crothers, a castaway British airman. When Adriadne Steelgarter goes gleefully charging through the island's revitalized Mirror, now connected to Skifander, HIggs pursues her. Unfortunately, the Mirror's power-source bites the dust as part of a general physical collapse, and it shuts off, leaving him stranded on the other side.

In The Works, The Unstoppable Higgs is given the epithets Hero and Sidekick. He is depicted as a young blond man with a sleepy grin. In his right hand he holds a full stein with a voluptuous feminine relief on it. He wears blue pants, a brown and orange horizontally striped button-down shirt with bars on the lapels. Over this he wears a purple coat with orange shoulder pads. On his head is a purple sailor's tam/toque (same kind of hat in the comic). The hat appears to be labeled "BONNER", "DONNEK" or something similar. In the comic the hat is labeled "Rozen Maiden".

Higgs introduces himself an airman third class; in old navies, the third mate is known as the boatswain pronounced and often written as "bosun", although in modern navies, third class is the lowest rank of non-commissioned officer.

The Higgs boson is an elementary particle of physics responsible for endowing particles with mass via the Higgs mechanism. It was first proposed in the 1960s; the search for it was well underway in the 1990s (when Girl Genius was being plotted); experimental evidence with a sufficient degree of confidence was finally reported in 2013 and Higgs et al. were awarded the Nobel prize.

As noted, we've finally been told Higgs' true identity (or at least job title..), but in the interest of history, here are preserved the bits and pieces of evidence which led up to that reveal:

For a (possibly) complete list of appearances of this character or other entity, see: The Unstoppable Higgs/Appearances.
Community content is available under CC-BY-SA unless otherwise noted.
Advertisement