Inspiration of the arts

First group shot... ✣
The Muses were a set of nine clanks created over 200 years ago by legendary master spark, Van Rijn, for The Storm King. They were designed to offer advise and inspiration not just to him, but to all who interacted with them, although said advice often tends to unhelpfully cryptic. Only five of the Muses have been named in-comic, but the names of all nine muses and their likenesses appear on a Foglio sketch for the card game Pairs:

Descriptions of the muses[]

The picture on the west inner tympanum of Tarsus Hall[1] of Transylvania Polygnostic makes the Muses look as if they were intended to mimic the classical muses in form and function, with each Muse assigned a particular area of expertise. Tinka is obviously the "Muse of dance and movement." The winged muse Otilia has specifically called herself the "Muse of Protection", while Moxana is evidently the "Muse of Mystery". These do not have obvious classical equivalents.

The assembled Muses are also illustrated in the Incorruptible Library's bas relief The Triumph of the Storm King ✣ , and during 'Ivo Sharktooth: Private Jäger' ✣ . 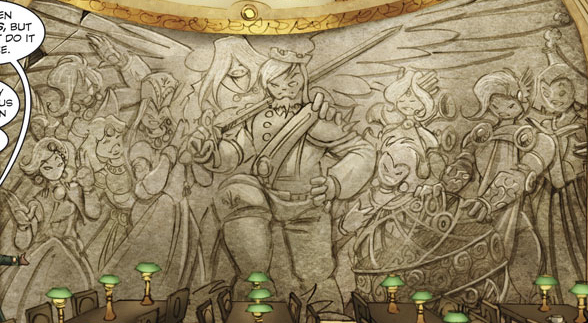 Muse of Time: The Enigma[]

Notes added to Van Rijn's notebook appear to identify the Enigma as the Muse of Time, but said notes were apparently not written by Van Rijn. Nothing resembling the Enigma appears in the panorama of the muses. Further notes found in the Hermitorium state that Van Rijn did not build the creature he calls the Muse of Time, contrarily to the other Muses. Instead, after many years of confusing but informative conversations with her, he captured her in an (unsuccessful) attempt to learn the secret of eternal life, and she stayed a prisoner for roughly 200 years.

It is therefore unlikely that the Muse of Time is part of the set of nine, as those were created by Van Rijn for the Storm King. The muses may have been reverse-engineered from the captured entity, or merely built using information she provided. However there are also hints that Prende may be the Muse of Time, given the story of "Prende's Lantern."

This currently dormant Muse is a large and imposing construction in the Incorruptible Library, with a massive set of curling horns, fangs and backward-bending legs, giving it literally a diabolic appearance. It is powered or activated by a device called the Heart of the Muse, ✣ which was hidden separately in the former Corbettite vaults in Library territory.

Following the fall of the Storm King, the muses needed to hide, as they were an irresistible lure to other Sparks, who wished to disassemble them in order to find out how they worked. Since Van Rijn was exceptionally Sparky, this has not met with much success. 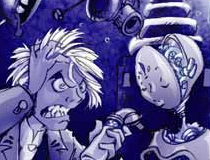 Tinka and Moxana hid undisguised in plain sight by connecting themselves with traveling shows, most recently Master Payne's Circus of Adventure, and pretending to be Muse copies. Desperation due to the condition of his sister prompted Tarvek to commandeer Tinka from the Circus three years prior to the start of the narrative, leading to him building an imperfect but impressive copy of Tinka to be operated by his sister from her life-support pod. Tinka was damaged afterward as Tarvek's father 'examined' her, but when the Circus returned to Sturmhalten, she was able to bring Moxana and Van Rijn's notes to Tarvek, recognizing him as the new Storm King. Tinka ended up being beheaded by the resident Geisters; following the Battle of Sturmhalten, Moxana's location and condition remain unknown.

When we first meet her, Otilia is hiding involuntarily in the body of the biological construct Von Pinn aboard Castle Wulfenbach, guiding and protecting the resident collection of noble children/hostages, most notably Gil and Tarvek, while her Van Rijn body remains concealed in the subterranean Castle Heterodyne lair of Lucrezia Mongfish Heterodyne. The mind inside the body is a copy or piece of the much vaster Castle Heterodyne controlling intellect. During Agatha's eventful visit to the castle, the clank-body suffers severe physical damage (up to and including another beheading), and the Castle-mind is transferred back to the Castle-structure proper, while Otilia's mind is moved to a Fun-Sized Mobile Agony and Death Dispenser. (She finds this state of affairs... acceptable...) This new(ish) clank, and the pieces of her original body both remain inside the (mostly) time-frozen Castle Heterodyne.

Prende is eventually discovered to be hiding in an ex-Corbettite artifact-vault under Paris, guarding the time-frozen Storm King. When released, he sets off in search of his sword, with Prende in tow. Following his destruction, it remains unknown who (if anyone) ended up in possession of Prende.

Orotine is the next to turn up, approaching a stunned Tarvek at a royal party in England, who clearly knows exactly who & what she is. Not long after, Orotine (who should know) reveals that Martellus is but a distant third in line as heir to the Storm King's throne - but Tarvek's position is not yet revealed.

Apart from the possibly-apocryphal image shown above, the specific fate of the other Muses remains unknown.

There also exists in the possession of The Immortal Library another humanoid clank called The Muse of Vengeance, about which little is yet known.

In a response to the Muses, an unnamed old-school Heterodyne made his own collection of humanoid clanks, the Eleven Deadly Sins.

There are indications that his (and, by extension, Tarvek's) design of their clank bodies replicates biological functions to some extent: Lunevka is affected by music, which she thought to happen only to meat-bodies before, remembers taste of chocolate enough to crave it, and later is capable of absorbing the Queen's Flame, which she also thought to be exclusive to living Sparks, while Moxana starts breaking down from depression without any physical damage after losing Tinka. How did he achieve this, and whether it was a deliberate decision or unplanned side-effect is unknown.

The prologue of Agatha H. and the Clockwork Princess depicts a meeting between Andronicus and, in a rare event, all nine of the Muses at once, occurring on the battlements of Sturmhalten Castle immediately before his scheduled marriage to Euphrosynia Heterodyne. The Muses very belatedly but explicitly warn Andronicus that his bride-to-be is a cat's-paw for her father and will betray her husband. Having no choice at this point, the Storm King proceeds with the wedding. It is also mentioned that Orotine produced maps that were extremely useful during Andronicus's battles with the Heterodynes, while Mawu and Liza are described as being "non-twins" who nevertheless speak in unison.

According to the prologue of Agatha H. and the Siege of Mechanicsburg, before being "rescued" by Lucrezia and unwillingly being subjected to the transfer described above, Otilia the clank spent over a hundred years chained up in some forgotten hallway. She also compares her clank body to a cup, capable of containing the ocean, commenting on Lucrezia's project to transfer part of the Castle's mind into it.

Comparison to other muses[]

Although writers accounted the Muses in Greek mythology as anywhere from one (Mousa) to three (Memory, Practice and Song) to four (Heart-delighting, Song, Beginning and Meditation) to seven to nine [3], eventually Hesiod, naming them, settled the count of nine Muses adopted by later European cultures. They were:

(The above information is excerpted from Wikipedia. See that article for more detail.)

Mawu and Lisa (or Liza) are the names of a Dahomean creator goddess and god. They are associated with the sun and moon, and are sometimes described as a single hyphenated and hermaphroditic being.

Prende is the Albanian goddess of love, sharing Friday as a sacred day with Aphrodite and Venus.

For a (possibly) complete list of appearances of this character or other entity, see: The Muses/Appearances.
Community content is available under CC-BY-SA unless otherwise noted.
Advertisement