Girl Genius
Register
Don't have an account?
Sign In
Advertisement
in: Articles with unsourced statements, Buildings, Articles with Appearances subpage 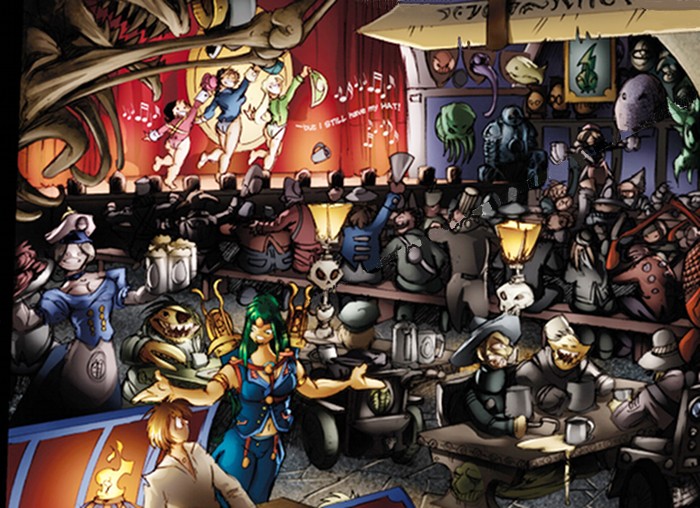 Based on Gil's statements, Mamma Gkika's used to be a bar that served Jägers before the fall of Castle Heterodyne. The bar is currently a tourist trap; the barmaids are (only, if that) dressed as Jägers.[2] It may also feature a rather salacious, but glowingly-reviewed burlesque act, also done by the false-Jäger barmaids. It may further be a brothel, certainly Klaus seems to think that it is a brothel approximately to his son's taste.[3]

One of the nightly events is a Apassionata von Mollusk: Dance of the Seven Snails, a "sensuous" ✣ performance.

There is, however, another establishment still serving Jägers hidden behind the tourist trap. This one is certainly run by Mamma Gkika herself. This Mamma Gkika's is not easy to access, being at least three levels beneath street, and guarded by at least one impressive-looking ward. Here, there would be even fewer reservations about what may be included in the burlesque.[4] From the tenor of certain comments made by the staff and judging from the decor of the interior rooms, it probably is also a Jägerbrothel.[5]

Furthermore, Mamma Gkika's also functions as an underground (figuratively, as well as literally) medical facility. Since the Jägers won't let anyone but a Heterodyne operate on them (since a Jäger is considered to be proprietary information, even by the Jägers), Jägers who get too banged up to fight come to Mamma Gkika's to recuperate.[6] (AN: given the extraordinary resilience and healing properties of a Jäger, it's rather terrifying to think of what has to happen to make a Jäger unable to fight). Mamma Gkika "patches them up," using some rather sparky medical devices[7] and a hefty dose of Battle-Draught[8], so that they are stable enough to be properly repaired by the Heterodynes, when they return. Given how many Jägers seem to be in the bar at the current time, Agatha Heterodyne may have an extensive line of patients to deal with when she emerges from Castle Heterodyne.

After his defeat of the Knights of Jove, Gil was escorted there by Da Boyz to conceal the injuries he sustained in the process. There, he was subjected to, and survived, Jäger field medicine. Which, according to the proprietress, might mean that Gil is somewhat more than human...[9]

It should be noted that the shadow government of Mechanicsburg, at least, appears to be fully aware of Mamma Gkika's mission. Apparently the Seneschal led Zeetha and Krosp in to retrieve Gil.

In addition to the Jägerfräulein, two other women dressed as much more scantily clad Jägers are seen on these pages working at Mamma Gkika's after the tourist's beer hall area is closed for the night. However, considering their attire and the fact that one appears to be serving drinks, it's possible that the secret bar (or at least the staff) shares some facilities with the beer hall after the human guests have gone home.

Being Jägers, they need more than just booze to keep them happy. As a result, Mamma Gkika has effectively scheduled an Evening Bar Fight to let them blow off some steam. The one time this is seen, she takes the stage, but tells them all to wait till she blows her whistle.[11] Van says that they were lucky that it wasn't Thursday night, which would be Poetry Slam Night,[12]. What that is, we don't know, and are not sure we want to; where Jägers are involved, the "slam" may be all too literal (to say nothing of the poetry). (Meanwhile, at the tourist trap upstairs, the patrons loudly sing well-known polkas.[13])

To prevent ✣ treasure hunters from ringing the Doom Bell, the hammer of the bell was kept hanging in Mamma Gkika's. When the time came for the Doom Bell to be rung for Agatha Heterodyne, Baron Oublenmach was assigned ✣ the task of replacing the hammer.

It is not known if the hammer was in the public area or the Jäger area.

At least at one point (mid 1990s), the connection between drunkenness and rapid healing was a common trope in MUDs (MultiUser Dungeons; i.e., text-only multiplayer online roleplaying games).[citation needed]

For a (possibly) complete list of appearances of this character or other entity, see: Mamma Gkika's/Appearances.
Community content is available under CC-BY-SA unless otherwise noted.
Advertisement