Girl Genius
Register
Don't have an account?
Sign In
Advertisement
in: Characters, Jägermonsters, Characters from Mechanicsburg,
and 3 more

Mamma Gkika is a female Jäger who runs a bar in Mechanicsburg that is named after her. it was frequented by Jägers back in the day. These days, however, Mamma Gkika's is one of the tourist traps in Mechanicsburg, catering to bored and jaded tourists who derive a vicarious thrill by drinking in an establishment with what appear to be Jägerfrau waitresses and enjoying the award-winning dinner show. Mamma hires human women to dress up as Jägerfrau waitstaff, which helps her hide in plain sight as the proprietor. Deep underneath this carefully-crafted illusion, quite literally, is a clandestine hangout and medical center for Jägers.

Not only is the fabulous Mamma Gkika one of only two female Jägers seen so far, she is also one of the Jägergenerals.[1] It's to her that the wild Jägers Jenka, Dimo, Maxim, and Oggie take the injured Gil in order to get him patched up as quickly as possible following his victory ✣ over the invading war stompers.

Notice the sword shaped copper hairpin Mamma Gkika is wearing when she first appears. It is possible that Klaus Wulfenbach is referring to this object when he tells his fanciful story ✣ about the Storm King to Phil Foglio, intended as a coded message to his son Gil. At the least, it is clear from comments that Mamma makes, that she and Klaus have some sort of a history.

Mamma Gkika does not normally wear a hat when running her bar, but upon Agatha's official assumption ✣ of the role of Heterodyne and finding it necessary to lead the returned Jäger troops during the Siege of Mechanicsburg, she dons an impressively tall shako ✣ , along with revealing that she has "De fun color change-y hepidermoose ✣ " (that last word is "epidermis", for those of you who have problems with Jagerspeak).

She is currently trapped in the time-frozen Mechanicsburg along with the other Jägergenerals. (She is in fact right at ground zero ✣ with Klaus and his Take-Five bomb.) 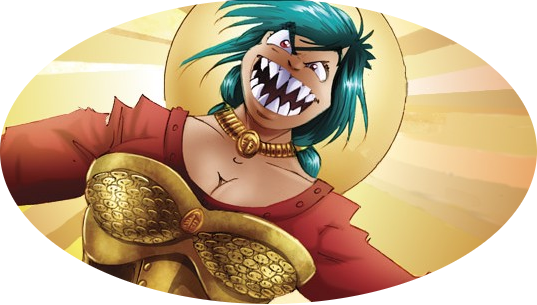 Ah, the sound of existential despair! Sounds like victory!

For a (possibly) complete list of appearances of this character or other entity, see: Mamma Gkika/Appearances.
Community content is available under CC-BY-SA unless otherwise noted.
Advertisement