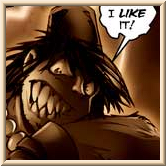 Knife is one of the earliest of the Old Heterodynes, son of the Ht'rok-din[1]. (The Heterodyne who established a fortress at the location that became Mechanicsburg, either Knife or his father, is pictured above.) He built the first Castle in Mechanicsburg in 1042. Knife was presumably a Spark.

The current Castle has called the person who built the first fortress in Mechanicsburg (commonly believed to be Knife) "the first Heterodyne" ✣ , but many would consider his father the Ht'rok-din to be one of the first members of the family to terrorize Europa. It is possible that Knife was the first to modify the family name to "Heterodyne". Alternatively, the Castle may consider the relationship between the Heterodynes and Mechanicsburg to be a key feature of the family, and therefore the first family member to settle in the area was the first "true" Heterodyne. 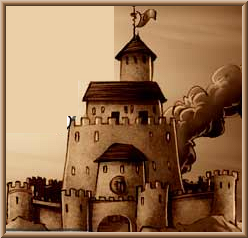 For a (possibly) complete list of appearances of this character, see: Knife/Appearances.
Retrieved from "https://girlgenius.fandom.com/wiki/Knife?oldid=78841"
Community content is available under CC-BY-SA unless otherwise noted.