Showing off for Agatha ✣

Gil's flyer, or alternatively, falling machine ✣ as Agatha calls it, is that rarity in the Girl Genius world, a means of aerial transportation that's heavier than air and therefore not an airship. It makes its appearance here ✣ , as a means for Gil to take his lady friend out for a spin and impress her with his Sparkiness. It is unfortunate for his ego (but essential for plot development) that it goes into a spin of the aerodynamic kind, and looks like it's going to punch a hole in the ground below, with messy effects on Gil, Agatha and Zoing. This, however, is just what Agatha needs to convince Gil that she too is a Spark to be taken note of, if he had any doubts in the matter. The flyer recovers at treetop level and climbs back up to Castle Wulfenbach, giving Agatha her first real glimpse of exactly what kind of mess she's gotten herself into.

It's somewhat banged up on re-entry to the Castle, but apparently not too badly, because indications are that Ardsley Wooster takes it (or at least what was not used to build the Rescue Machine) when Gil sends him out looking for Agatha while she's captive in Sturmhalten. At least the Geisterdamen sentries describe ✣ the airship that Wooster is piloting (although they don't know who's in it) as "small and very fast, like a giant bird." Agatha concludes from this description that Gil himself has come looking for her. She's wrong, but close enough.

We don't know whether this is the start of a heavier-than-air trend or just idle experimentation by a talented, but possibly bored, Spark. (Though a fixed-wing flyer that looks similar to Gil's is seen early on in Agatha's room ✣ , that craft lacks a propeller and appears to be a lighter-than-air design.) Certainly airships continue to fill the skies over Europa for a long time after this episode. Stay tuned. 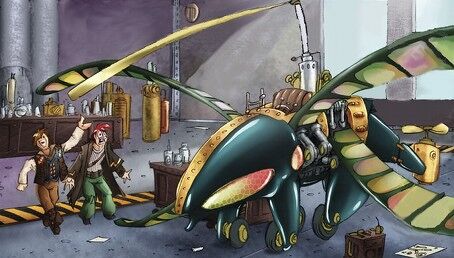 Much later on, we are introduced to Gil's new version ✣ of this device, which has been completely revised and features both actively-flapping wings and a helicopter rotor. To Tarvek's extreme displeasure (he really hates flying), this is how he, Othar and Captain Vole involuntarily depart Castle Wulfenbach and return to Mechanicsburg. Adding to Tarvek's woes, he is forced to get the machine running even as Othar and Vole whale on each other, succeeding just before smashing into the ground. His opinion of the operating mechanism is that it is crude, going in classic Wulfenbach fashion with raw power at the expense of any finesse. But yes, fine, it's brilliantly executed.

The trip in the print novels is even more chaotic, with the machine being fired upon by all sides in the Siege of Mechanicsburg, bouncing off various bits of landscape, and finally flying to pieces upon landing.

For a (possibly) complete list of appearances of this character or other entity, see: Gil's flyer/Appearances.
Community content is available under CC-BY-SA unless otherwise noted.
Advertisement